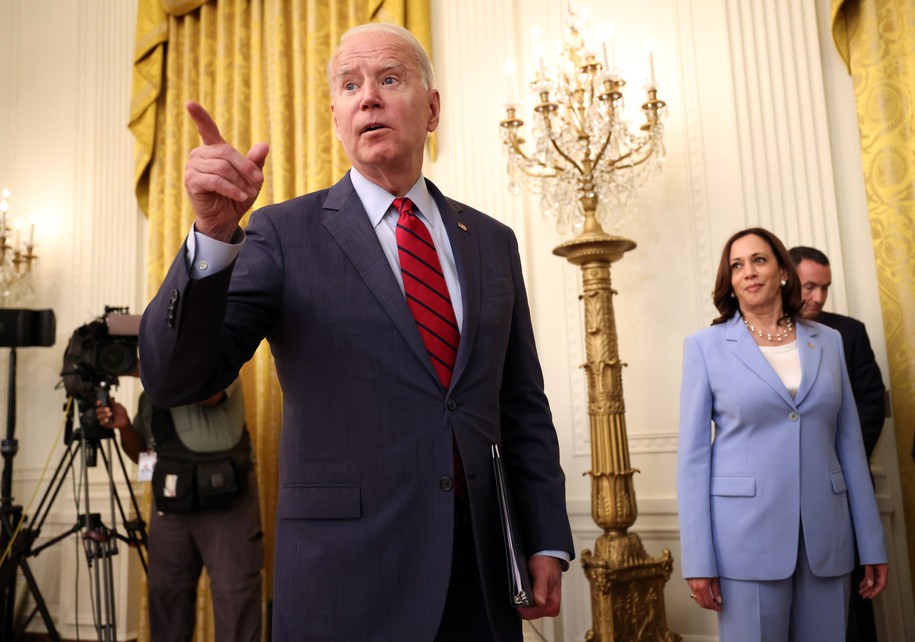 Text messages and interviews show that Stop the Steal leaders fooled the Capitol police and welcomed racists to increase their crowd sizes, while White House officials worked to both contain and appease them.

ProPublica has obtained new details about the Trump White House’s knowledge of the gathering storm, after interviewing more than 50 people involved in the events of Jan. 6 and reviewing months of private correspondence. Taken together, these accounts suggest that senior Trump aides had been warned the Jan. 6 events could turn chaotic, with tens of thousands of people potentially overwhelming ill-prepared law enforcement officials.

Rather than trying to halt the march, Trump and his allies accommodated its leaders, according to text messages and interviews with Republican operatives and officials.

The 3 ways Biden’s bipartisan + reconciliation vehicles could get derailed:

3. The great unknown: Can Dems hold on to their fragile majorities thru the fall? https://t.co/LB1obYrssv

They Seemed Like Democratic Activists. They Were Secretly Conservative Spies.

Operatives infiltrated progressive groups across the West to try to manipulate politics and reshape the national electoral map. They targeted moderate Republicans, too — anyone seen as threats to hard-line conservatives.

Large donations to the Democratic National Committee — $10,000 each — had bought Beau Maier and Sofia LaRocca tickets to the debate. During a cocktail reception beforehand, they worked the room of party officials, rainbow donkey pins affixed to their lapels.

In fact, much about them was a lie. Mr. Maier and Ms. LaRocca were part of an undercover operation by conservatives to infiltrate progressive groups, political campaigns and the offices of Democratic as well as moderate Republican elected officials during the 2020 election cycle, according to interviews and documents.

Using large campaign donations and cover stories, the operatives aimed to gather dirt that could sabotage the reputations of people and organizations considered threats to a hard-right agenda advanced by President Donald J. Trump.

Would have really like to have listened in on that call from Rome…..(because you know ArchB. Gomez got one)
After controversy, U.S. Catholic bishops say there will be ‘no national policy on withholding Communion from politicians’ https://t.co/vaN3sZqEkq

Giuliani disgraced his profession — and his country — by defending the indefensible

Attorneys are supposed to — they are ethically bound to — zealously represent their clients, however unpopular. As a general matter, we should salute this zealousness, not punish it, for fear of chilling representation of those who need it most. The quintessential example of this principle is John Adams, who as a young lawyer famously defended British soldiers accused in the Boston Massacre.

As Adams would write in his diary, the defense “procured me anxiety, and obloquy enough. It was, however, one of the most gallant, generous, manly and disinterested actions of my whole life, and one of the best pieces of service I ever rendered my country.”

But advocacy has its limits, and Rudy Giuliani, it is safe to say, is no John Adams. One man defended the defenseless in the greater service of the rule of law; the other asserted the indefensible in the service of overturning the results of an election. And so, on Thursday, New York State Bar authorities took the extraordinary step of ordering Giuliani, once the top federal prosecutor in Manhattan, immediately suspended from the practice of law as he faces the prospect of being permanently disbarred.

There’s been debate about whether or not college-educated whites will return to their pre-Trump partisan baseline now that he’s no longer president.

But the polling data we have so far suggests that recent Democratic gains with them are sticking.https://t.co/mvJOvv9AAG

After the Lost Cause

Why are politics so consumed with the past?

The South is still a conservative place, but election analysts no longer need a special regional element to explain its voting behavior: Democrats do better in states, like Virginia and Georgia, that have large numbers of Black and college-educated white voters, and worse in places that don’t. The outrage of conservative state legislatures over social-studies curricula involves concession that school boards from Texas to North Carolina have embraced a progressive view of history and current events. The most significant Confederate monuments—those on Richmond’s Monument Avenue and Stone Mountain, near Atlanta—are either being removed or might soon be. “The whole ideology of the Lost Cause is in deep trouble,” David Blight, the eminent Yale historian of the Civil War and its aftermath, told me earlier this week. “The fact that Monument Avenue is being taken apart is something that no one in my field truly thought they would ever see.” Even more striking to him are the deep discussions under way about reimagining Stone Mountain, with its ninety-foot-high carvings of Confederate leaders. Blight said, “In my field, we’ve had conference after conference and talk after talk about the Confederate monuments and everyone always says, ‘Well, Stone Mountain, they’ll never be able to take that down.’ ” But now they might. For generations, conservative Southern politicians had openly defended the Confederate cause. Blight said, “Republicans just don’t go there.”…

For many generations, white Northerners treated the white Southern experience with an excess of politeness. If white Southerners’ relationship with their history was, as Smith put it at Blandford, a “family” story, then white Northerners would behave as if we were in someone else’s house, and avoid questioning local prerogatives. That deference, and the deceitful monuments and histories to the Confederacy that it allowed, also had the effect of “Southerning” American racial cruelty. From the Northern perspective, the history of the United States could be split into two experiments: one of them agrarian, oligarchic, nostalgic, dependent first on chattel slavery and then an explicit racial hierarchy, and broadly failed, and the other urban, capitalistic, democratic, defined by irregular progress toward racial equality, and essentially successful. But the South no longer seems so exceptional, or peculiar, in its economy or its politics. And as a public history of the enslaved and their descendants has developed, it has included some reminders—like the sugar kettles at the Whitney Plantation—that even in its racial cruelty this was always one experiment, not two.

“This is going to be a fight of his presidency,” @PressSec said. “If you have such a fear of making it easier and more accessible for people to vote, I would ask you what you’re so afraid of.” https://t.co/1iJvDfYRlR

Frito-Lay had workers move the dead body of a coworker and...

The U.S. and EU discuss ways to solve the global chip...