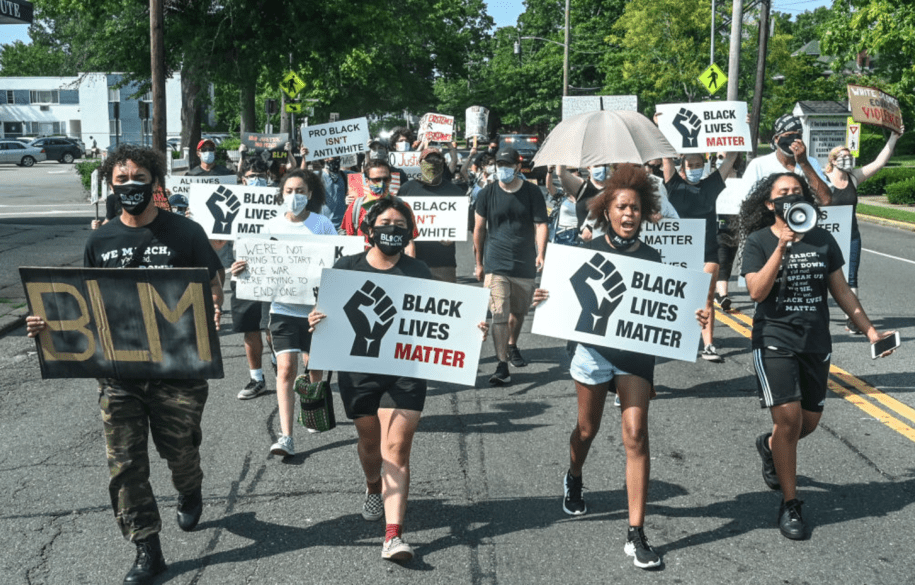 Arkansas, Florida, Iowa, Oklahoma, and Tennessee have now passed what proponents refer to as “anti-riot laws,” with similar laws currently pending in 15 states, according to ICNL. These laws create new and heightened sentences for individuals found guilty of participating in a riot.

Robinson said anti-riot laws are broad and often interpreted inconsistently, creating a wide umbrella for police officers and prosecutors to arrest and charge people participating in protests they see as undesirable.

“Property destruction is illegal, violence against others is illegal, conspiracy to commit violence, all those things are already illegal,” Robinson said. “The rioting laws create a liability for just being part of a crowd, both a collective liability and a second liability for ‘threatening behavior.'”

In the wake of protests against the Dakota Access Pipeline (DAPL), North Dakota and South Dakota became early adopters of enhanced penalties for “rioting” to disincentivize people from showing up to future pipeline protests. Many of those arrested and charged with rioting during the 2016-2017 pipeline protests were Indigenous activists and journalists. Although most of these charges ended up being dismissed or resolved through plea agreements or diversion programs, the number of arrests created a public perception that the DAPL protests were out of control.

“I always found that so crazy,” said Joye Braun, a front-line community organizer with the Indigenous Environmental Network. “Because how can you have a riot in the middle of the prairie?”

North Dakota, the site of most of the DAPL protests, enacted a law in 2017 that heightened the categorization of participating in a riot to a Class A misdemeanor. In 2019, North Dakota made it a Class C felony to disrupt “critical infrastructure,” specifically targeting protesters trying to interrupt pipeline construction. Pipeline protesters convicted under this law could face a punishment of five years imprisonment, a $10,000 fine, or both.

Braun said North Dakota enacted these laws to disincentivize out-of-state protesters—who brought considerable attention to the DAPL demonstrations—from showing up in the future. According to a recent analysis from the Indigenous Environmental Network and Oil Change International, Indigenous-led protests have stalled greenhouse gas pollution equivalent to around one-fourth of total emissions from the U.S. and Canada.

Braun said Indigenous activists have had to think outside the box to find ways of safely engaging in political action in the face of new laws. Last summer, the Cheyenne River Grassroots Collective members organized a powwow at a Keystone XL pipe yard to raise awareness about violence toward Indigenous people from extractive industries. When organizers could not get a permit for a street protest in Rapid City, they took over the sidewalks. One time, Braun said, activists held an action at a busy four-way intersection, entering each crosswalk when the pedestrian signal gave the walk symbol. Police have threatened to arrest demonstrators at some of these actions and have occasionally taken photos of license plates and water protectors, but they have mostly declined to make arrests during these kinds of events.

Know the law and your rights

Oregon has a long history of pro-anarchism, environmental, and trade protests in the state. And yet, Lauren Regan, the executive director of the Civil Liberties Defense Center in Eugene, Oregon, had rarely seen a riot charge before the 2020 Black Lives Matter protests. According to data from the Prosecution Project, Oregon had one of the highest numbers of arrests on felony riot charges during the 2020 racial justice protests. However, most of these charges were dropped or reduced to misdemeanors.

Regan said the uptick in arrests for rioting was unprecedented, and protest participants and CLDC staff did not predict that acts like vandalism would result in felony charges. CLDC defended many of the local activists who were charged. In Eugene, the overwhelming majority of protesters charged with felony riot ended up taking plea offers that resulted in low-level misdemeanor convictions or diversion agreements. While the new laws raise the risks for protesters, Regan believes that large-scale movement-building is the best way to combat anti-protest legislation, and organizers need to learn how to operate in an increasingly restrictive environment.

“Especially for organizers [who] are planning actions, making sure you know your rights and the actual wording of laws will help you know where the line is drawn between legal and illegal,” Regan said. “There are often ways to mitigate the threat of felony charges by simply understanding the words of the statute.”

Some activists have successfully challenged anti-riot laws in court. In 2019, a lawsuit from South Dakota organizers and the American Civil Liberties Union led to a judge blocking South Dakota’s new “riot boosting” law. The law aimed to crack down on activists interrupting construction of the Keystone XL pipeline by penalizing individuals and organizations who offered support for a protest police declared to be a riot.

The NAACP of Florida, Dream Defenders, and other BIPOC organizations filed a lawsuit that successfully blocked Florida’s anti-riot law, which broadened the definition of a riot to a group of three or more people that intentionally put property or people in “imminent danger.” The language of the law ensured that violence did not need to actually occur for individuals to be arrested and made it possible for a large group to be charged with rioting in cases where only a few may have committed violence.

“If this court does not enjoin the statute’s enforcement, the lawless actions of a few rogue individuals could effectively criminalize the protected speech of hundreds, if not thousands, of law-abiding Floridians,” Judge Mark Walker wrote in his 90-page decision, which declared the law “vague and overbroad.”

While challenging these laws in court has been largely successful, some states are still pushing for restrictions. In 2020, South Dakota passed an anti-riot law with new wording to overcome the constitutional objections of the 2019 law. It allows the state to charge individuals with a felony for “incitement to riot” and opens the door for civil lawsuits against protesters. Meanwhile, Florida Gov. Rick DeSantis plans to appeal Walker’s decision.

Activists in Oklahoma have tried to use direct democracy and lawsuits to combat a new law that would allow motorists who hit protesters to avoid liability “while fleeing from a riot.”

The law passed a year after a pickup truck drove through a crowd of Black Lives Matter protesters on a Tulsa interstate, sending two of them to the hospital with injuries. The Tulsa County District Attorney’s Office declined to press charges against the driver, saying he and his family were “in a state of immediate fear for their safety.” The new law creates penalties for protesters found to be participating in a riot while “obstructing traffic.”

“We talk about running over protesters, but if someone’s on the sidewalk with a stroller walking their kid and you’re trying to “escape from a riot,” you can run over that woman and her kid and still not have civil or criminal liabilities,” said Joshua Harris-Till, one of the lead organizers for the No On 816 campaign that aimed to create a veto referendum against the new law.

Activists hoped to use the state’s veto referendum process to get Oklahoman voters to repeal the law but fell short of the number of signatures required to put the new legislation on the ballot. This was largely due to the introduction of a new form that made signature collection more difficult.

Organizers also encountered people who supported the law, saying protesters shouldn’t be in the streets and should be able to run over protesters. One response organizers heard from supporters often was, “I’m just supposed to let protesters pull me out of my car and kill me?” Many others did not know about the 2020 incident on the Tulsa interstate or did not understand the new law. Harris-Till said that future advocacy efforts would definitely need to include an education campaign.

Activists in Oklahoma are now looking into starting an initiative process. If they get enough signatures, they can create a referendum for a new law that overturns the existing one. In the meantime, the Oklahoma chapter of the NAACP is challenging the law’s constitutionality in court.

“So many times we do protests and marches, but we don’t always translate that over to the political battles that we have to fight,” Harris-Till said. “You do the marches so that you can have a seat at the table, because once you get that seat at the table, you can talk to these policymakers and say hey, these are the changes that we want to see.”

Sravya Tadepalli is a freelance writer based in Oregon. Her writing has been featured in Arlington Magazine, Teaching Tolerance, the Portland Tribune, Oregon Humanities, and the textbook America Now.

China’s regulatory crackdown is creating value in parts of its market,...

Here’s just how much private prison profiteers sunk into the 2020...

Covid passports: How do they work around the world?