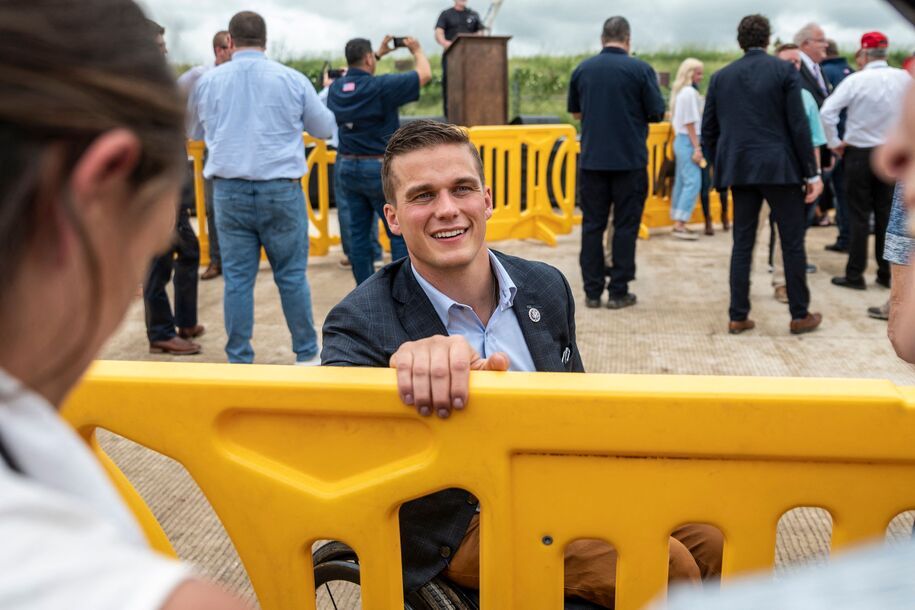 Here are the images.

Carey told the Citizen Times that “I’m 100% certain it was a knife. I was 20 years in the military. Attention to detail is my bread and butter and what kept me alive.” Citizen Times points out that North Carolina General Statute 14-269.2 makes it a “Class 1 misdemeanor for any person to possess or carry, whether openly or concealed,” a bowie knife, or a switchblade knife. The super PAC Fire Madison Cawthorn posted this image of the possible type of knife Cawthorn allegedly attempted to conceal … during a school board meeting.

Army veteran Carey recently announced his candidacy for Cawthorn’s 11th District seat. Carey is running on a couple of things: one, the idea that Democrats “are coming for your guns is a lie,” and two, Cawthorn is a shitheel who is unabashedly more interested in whatever gets Madison to the next rung of the GOP power ladder than he is on doing anything for the people who elected him. “I am asking you to join me if you are fed up with the fear-mongering, half-truths, incompetence, and false warrior bravado of our current representative.”

Carey told the Citizen Times that he is less interested in whether or not Cawthorn gets charged for breaking this law; he’s more wondering: In what reality does Cawthorn believe he needs to bring a knife to a school board meeting? “There are children. There is no need for a weapon.”

The Charlotte Observer reports that Cawthorn had this to say in response to the allegation when it was brought to his attention after another school board meeting appearance in Johnston County, North Carolina: “I don’t really know anything about that. I’ll have to look into it, but I don’t know anything about it.”

But, according to Henderson County Public Schools spokesperson Molly McGowan Gorsuch, the district has notified the Henderson County Sheriff’s Office concerning Cawthorn, saying: “We are committed to the safety of our staff, students, and members of the public in our schools and on our properties, and will continue to fully cooperate with law enforcement.”

This isn’t the first time Cawthorn has broken the law with weapons. One of the many reasons why people are calling for Cawthorn to be expelled from Congress is the fact that besides inciting violence on Jan. 6, 2021, and besides continuing to promote a false narrative of a rigged election, Cawthorn is suspected of having carried a loaded firearm on his person in the House chambers—a federal offense.

By the way, that’s just one example. At the end of July, a police report confirmed that the crap legislator was illegally carrying weapons at Asheville Regional Airport back in February. Cawthorn was supposedly questioned by TSA after a Glock 9 mm handgun was found in his carry-on bag. Cawthorn’s office said that it was mistakenly left in his carry-on but was meant to be stowed away in his checked luggage. According to the news, Cawthorn was not fined for his infraction.

Cawthorn is approaching an election year. Not unlike most elected officials in our modern Citizens United Supreme Court disaster era, Cawthorn is always running for reelection. However, like Trump and many modern day Republicans, Cawthorn is only interested in power and reelection, and his mediocrity as a person means he can’t multitask and is only focused on one thing: promoting himself. As Daily Kos community member randallt has covered diligently for DKos Asheville, Cawthorn spends most of his time searching out cameras and microphones in the hopes of saying provocatively self-serving things.

Monday’s histrionics by Cawthorn are par for the course, and are seemingly a part of his recent campaign to tour around his state trying to soak up the poisonous fumes of angry and frightened parents as he pretends to fight for “freedom” by way of attacking mask requirements in public schools.

Kaia Gerber and Jacob Elordi Can’t Keep Their Hands Off Each...

What The Princess Diaries’ Heather Matarazzo Really Thinks of Her Character...

Tonga’s Oiled-Up Flag Bearer Is Back and Heating Up the Tokyo...

Here’s Why Exes Jennifer Lopez and Alex Rodriguez Are Both Vacationing...

See the Products the Jonas Brothers Use Before Every Show –...