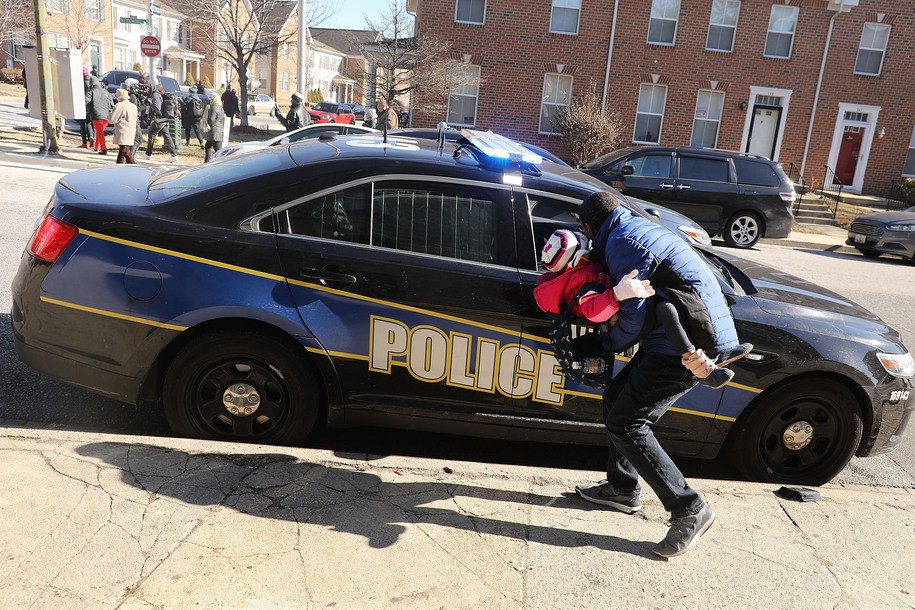 In a court filing, Faye Cottman, Damon Gray, Amber Spencer, and Audrey Carter—the mother of Dwayne Cheeks, who was shot and killed—call out the BPD’s “pattern and practice of unconstitutionally searching, seizing, retaining, and destroying the personal property of victims of violent crimes in Baltimore.” NBC gives a basic breakdown of how the BPD operate.

The filing is a part of a proposed larger class action lawsuit against the department, as lawyers say there are numerous examples of this practice by law enforcement. Spencer, who was celebrating her boyfriend’s birthday on a front stoop in a Baltimore neighborhood, was shot in the chest and in the back of the head by a series of bullets sprayed at the party. Spencer, clearly a victim of this terrible violence and crime, woke up in the hospital. When she asked her mother where her phone was, her mother told her: “The police took it.” But guess what else they took? Her clothing and $400 in cash that she had on her person when this terrible incident took place.

The BPD has not returned her items, nor did they ever give her a tally of the items they took. Off the victim. Of a crime. “I really don’t go outside; I go to work and I go home, now,” she said. “Anything that drops or pops, I’m like, ‘What was that?!’ I‘m scared to live a normal life. I still have a bullet in my head, so that’s scary too. I’m praying that nothing happens. They said the bullet is lodged in my skull, so it’s not going anywhere. They said removing it would cause more damage than not removing it.”

In the case of Audrey Carter, her son Dwayne Cheeks was shot a killed in the summer of 2018. His phone, his keys, his earphones, and a lottery ticket were all taken by police. Carter asked BPD when she would be able to retrieve some of these items, now sad keepsakes for her to remember her late son, and was told that police needed the items for their investigation. After waiting for a year and a half, Carter was told that her late son’s possessions had been accidentally destroyed.

When Carter asked how this could happen, the BPD said they had sent a letter to the deceased Cheeks telling him he could retrieve his items.

“I said, ‘Do you understand that’s my son? You’re sending a letter to my son at his old address!’” she said. “So he said the letter came back. Of course it came back, because [my son] has passed, he’s not going to accept the letter! I said, ‘It doesn’t make any sense that you would send a letter to the deceased!’”

In April, the Baltimore Sun reported on Faye Cottman, who along with her 11-year-old child was shot on a playground in 2019. When interviewed by law enforcement in her hospital bed, she explained over and over again that she did not know and had never even seen the perpetrator of the crime. BPD continued to press Cottman while she recovered from surgery to remove the bullet from her head, saying they could go through her phone to find out if she had any prior relationship with the suspect. Even after the suspect was tried and committed to a psychiatric institution in September of 2019, Cottman still hadn’t received any of her or her daughter’s belongings back from the BPD.

This is just the latest case against the BPD. The corruption amongst officers in the BPD has been so vast that hundreds, if not thousands, of arrests and cases and convictions are under review. Everything from police violence against citizens and children to planting evidence has been videotaped. In 2019, Baltimore State’s Attorney Marilyn Mosby released a statement that her office would no longer prosecute marijuana possession, which was followed by directives for law enforcement to stop arresting people for petty crimes like minor traffic violations and prostitution.

I guess the BPD figured that the best way to make that money was just take everything they find at the scene of a crime, no matter who it belongs to.

Let’s be crystal clear on this: Civil asset forfeiture has turned law enforcement into an organized burglary ring. Civil asset forfeiture has not shown itself to be an effective way of disabling organized crime and the drug trade. Not just from its citizens, but from our children. In Missouri, where asset forfeiture laws were tied to helping to fund public schools as a way of garnering public support, law enforcement has figured out how to funnel most of that money back into its own coffers. The federal government was able to pull in a reported $2 billion off of people who did not receive proper due process over the past 15 years, according to a report released in 2020.

Has Damian Lewis Left Billions for Good? He Says… – E!...

Biden Administration Punts on Due Process Rights for Guantánamo Detainees

Kaley Cuoco Takes Off for The Flight Attendant After Surprise Divorce...