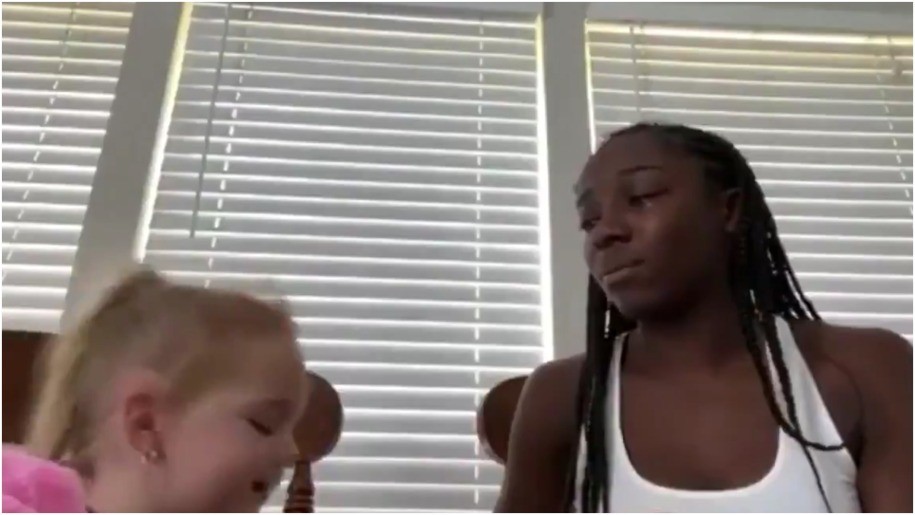 Bailey told the news station that officers also questioned her mom and a social worker before following them to baggage claim. “The whole time they were talking with us, people kept staring at us, whispering and stuff,” Bailey said.

After a flight, law enforcement accused Lakeyjanay Bailey of human trafficking her 4yo white sister, Olivia, & demanded to speak w/ their mother & a social worker to confirm their relationship! This traumatic experience shouldn’t have happened! pic.twitter.com/r5Syya0Hj9

She said it’s clear that she was racially profiled. “If the roles were changed and it was a white person walking off the plane with a Black person, like a Black child, I feel like things would be different,” Bailey said.

Frontier Airlines issued this statement to The Denver Channel:

”A concern was raised during the flight by another passenger who was sitting near the woman and child and suspected human trafficking. That passenger approached the flight crew with those concerns and subsequently completed a written report during the flight to document her observations. The captain was notified and felt an obligation to report the matter. Air travel is one of the most common means for human trafficking. Race played no part in the actions of the flight crew who were following established protocols”

Bailey said she and her family are considering suing the airline. Civil rights attorney Ben Crump tweeted on Tuesday: “After a flight, law enforcement accused Lakeyjanay Bailey of human trafficking her 4yo white sister, Olivia, & demanded to speak w/ their mother & a social worker to confirm their relationship! This traumatic experience shouldn’t have happened!”

Bailey’s experience, though frustrating, is unfortunately not unusual. Keia Jones-Baldwin, a Black North Carolina therapist, told The Today Show in 2019 she was accused of kidnapping her white son Princeton, who she was in the process of adopting. Jones-Baldwin was having car trouble and decided to knock on a local resident’s door when she said the person who answered the door called the police and accused her of stealing both the car and the child. She was again accused of kidnapping while vacationing with her family in Tennessee. Jones-Baldwin had decided to do a Western photoshoot. “The girl behind the camera would disappear and then come back. Finally she asked, ‘Is that your baby?’” Jones-Baldwin said. “I told her he was. Then she said, ‘I just took picture of this baby with his family two weeks ago.’”

The incident actually led to the authorities being called and Jones-Baldwin being made to show a custodial document proving she had permission to travel with her son. “We get a lot of stares,” Jones-Baldwin said. “I’m frequently asked if I’m Princeton’s babysitter … I get, ‘Why didn’t you let him stay with a family of his own race?’”

Millions Could Soon Lose Medicaid Coverage Started During the Pandemic

Can the vaccinated develop long Covid?

Many are wondering if Trump botched the Census. It would be...

Why Celebs Like Kate Hudson and Katherine Schwarzenegger Love Allbirds –...

Candidate recruitment critical ahead of this latest Most Important Election In...