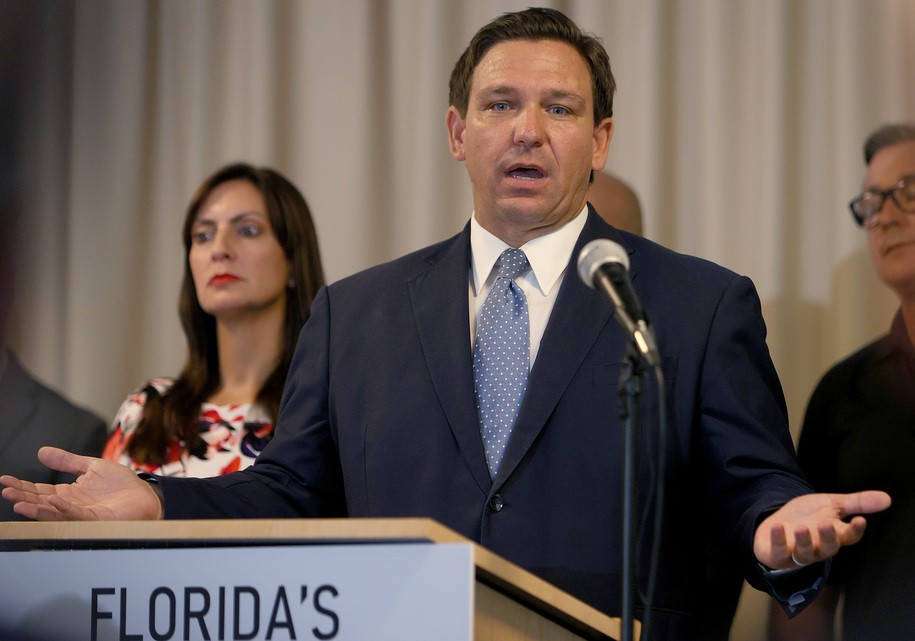 On Tuesday, DeSantis held a press conference where—this is true—he defended his anti-mandate mandate by chastising the National Institutes of Health (NIH) for failing to spend enough money and time on studying the safety of masks. Because it’s not as if everyone from medical workers to miners to carpenters has been wearing masks for decades. The N-95 mask itself has been around for over 25 years.

DeSantis then followed up by saying it was “perfectly reasonable” for a parent to say they would send their child to school without a mask. He then renewed his threats against school officials who insisted on masks, claiming that it was perfectly okay to block the salaries of school board members and superintendents who approved mask mandates for violating his order.

During this press conference, DeSantis claimed that cases of COVID-19 were on the decline, which immediately brought a response from a reporter who said he had just come from a local hospital: “Doctors are telling me things are only getting worse here, and I’m hearing that from a number of people.” That statement was backed up by record numbers of new hospitalizations.

DeSantis responded that he was basing his claims that things are getting better on “leading indicators that will later be reflected in the hospitals.”

As CNN reports, at that same event, DeSantis was asked about a statement from an official at the Strategic National Stockpile who noted earlier in the day that the federal government had dispatched 200 more ventilators and 100 high-flow nasal cannula kits to the state of Florida in response to an urgent request.

DeSantis sneered at the idea. “I would honestly doubt that that’s true,” said DeSantis, “but I’ll look because we have a lot of stuff that we stockpiled over the last year and a half through the Department of Emergency Management. I’ve not had any requests across my desk. I have not been notified of that.”

However, as The Washington Post confirms, those ventilators were sent. Because they were requested.

Weesam Khoury, a spokesperson for the Florida Department of Health [(DOH)], told The Post on Wednesday that the agency helped make the request to the federal government, saying it “reviews health-care needs statewide on a consistent basis.”

Why wouldn’t the DOH run this request past DeSantis? There are a couple of possibilities. One is that they simply didn’t think it was necessary; in most states, governors don’t try to micromanage experts who are dealing with a public health crisis. But then, this is Ron DeSantis, the guy who is going out of his way to send threatening letters to individual school administrators for having the audacity to protect students.

That brings up the other possibility: The Department of Health didn’t ask DeSantis because they were afraid he would say no. After all, accepting ventilators from the federal government—from Joe Biden’s federal government—sends a clear signal that DeSantis’ policies in Florida are a disaster. That the 134,506 cases recorded there last week, which are more than a quarter of all the cases recorded in the country, show a government that has utterly failed its citizens. That the lack of adequate ventilators on-hand shows how DeSantis was more concerned about continuing to push the most extreme political position than to tend to the actual needs of his citizens.

Why would the federal government be getting requests from Florida that didn’t cross DeSantis’ desk? Because going around DeSantis is the only way to get things done in Florida.

Of course, there is a third possibility. DeSantis may be simply lying. Somehow, that doesn’t seem unlikely.

The 2021 Annual Report on US State Vaccine Legislation

You Already Renewed for Season 4 on Netflix – E! Online

No Cake, Sit-Down Dinner or Flower Centerpieces: Relive Every Detail of...

Wall Street banks racked up $650 million in fees and stock...