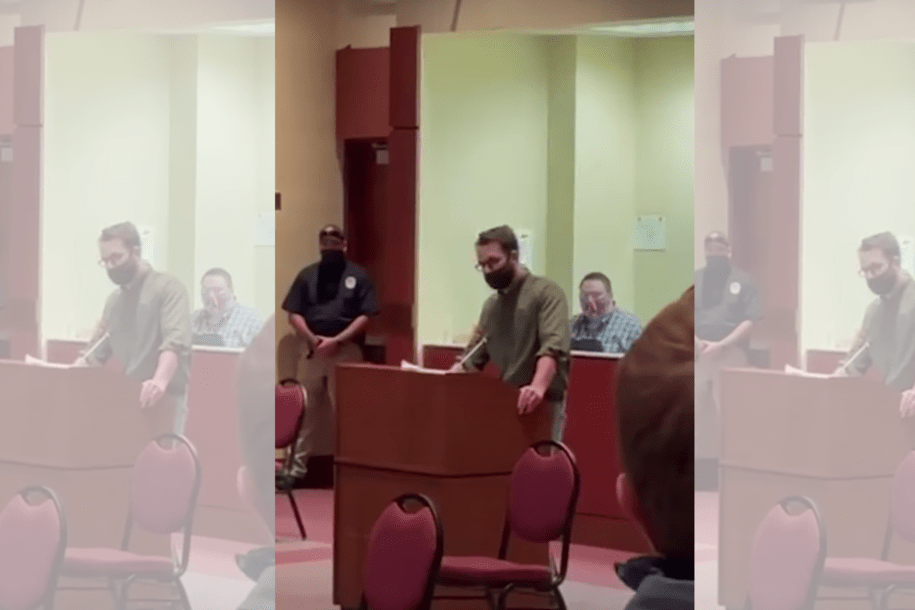 Matt Walsh, the host of the popular right-wing podcast Daily Wire, leased property in Loudoun County as a loophole to attend Loudoun County’s school board meeting in Virginia. After enforcing transgender-inclusive policies, the school board received threats and other disruptions from right-wing opponents, which resulted in the school adopting new meeting rules that require all speakers to be students, parents, residents, or business owners in the county, Right Wing Watch reported.

“The School Board is making these changes in order to ensure that the voices of our parents and the LCPS community are heard, rather than out-of-town agitators who would make Board meetings a platform for national politics or to enhance their own media profiles,” School board chair Brenda L. Sheridan said.

To that, Walsh claimed on Facebook he would not only attend the meeting but also lead a “Protect Your Kids” rally outside the school board meeting Tuesday.

“To protest this madness, I’ll be leading a rally outside the school board meeting on September 28,” he said on Facebook. “The time for sitting on the sidelines is over. Schools that harm children must be confronted. We must speak up against this indoctrination loudly and in person”

He also mocked the school board’s rules and shared that he is now in Virginia. Just to clarify, this means that in order to attend the meeting and protest policies at a school—one his children do not attend and is not even in his actual home state—Walsh decided to take out a lease in the district. According to Fox News, he was able to rent a room from a friend for $1.

“Loudoun County changed the rules so that only residents can speak at the school board,” he tweeted Friday. “In unrelated news, I’m proud to announce that I am now a resident of Loudoun County. Just rented a home in the area. I’ll have the lease agreement. See you at the meeting!”

In a separate tweet, he wrote: “For too long, I have been a Virginian trapped in a Tennessean’s body. It feels so good to finally live my truth openly. I’m here, I’m Virginian, and I’m proud.”

After finding a way around what he called “obstacles,” Walsh then harassed and targeted Loudoun County board members during Tuesday’s meeting.

He not only called them “poison” and “predators,” but “child abusers” and “cowards,” as well, who he claimed will not be able to silence him and his supporters.

“I would thank you all for allowing me to speak tonight, but you tried not to allow it. Yet, here I am,” Walsh said. ”Now you only give us 60 seconds, so let me get to the point. You are all child abusers,” Walsh continued.

“You prey upon impressionable children and indoctrinate them into your insane ideological cult. A cult which holds many fanatical views, but none so deranged as the idea that boys are girls and girls are boys.”

They only give you 60 seconds to speak, they won’t show the speakers on the livestream, they make you wear a mask, and all of that after requiring ID and proof of residence to enter. They put up every obstacle they could but I still said my piece.

“By imposing this vile nonsense on students to the point even forcing a young girl to share locker rooms with boys, you deprive these kids of safety and privacy and something more fundamental, too–which is truth. If education is not grounded in truth then it is worthless. Worse, it is poison.”

He concluded with: ”You are poison. You are predators. I can see why you try to stop us from speaking. You know that your ideas are indefensible. You silence the opposing side because you have no argument. You can only hide under your beds like pathetic little gutless cowards, hoping we’ll shut up and go away. But we won’t. I promise you that.”

Of course, after the incident, he went over to Fox New’s Laura Ingraham to brag of how he “outsmarted” the school by faking his residence.

“They said they made that change to disallow non-residents. It had nothing to do with me. I became a Loudoun County resident coincidentally,” he said. “It’s a lifelong dream I have had. I decided to finally come out and live my truth as a Virginian and it worked out this way.”

Walsh also claimed that the reason why the school enforced rules to stop outsiders from speaking at meetings was not because of the threats they received but because the school’s trans-inclusive policies are “indefensible” and they are “indoctrinating kids into their religious cult.”

This isn’t Walsh’s first stunt. He went viral last month after attending a school board meeting in his home state of Tennessee.

Walsh went viral last month for a similar incident in which he harassed the Metro Nashville Public School Board over the district’s face mask mandate for elementary school students.

“You the school board have decided that our kids should go to school all day, every day wearing muzzles like rabid dogs. I have listened to your arguments and I’ve noticed that they’re missing a few things, namely, evidence, data, science, common sense, and basic human decency. You presented no facts at all, so let me do that now,” Walsh said.

NBC refuses to air Golden Globes over lack of diversity

California is requiring proof of Covid vaccination for state employees

Eve Reveals The Moment She Found Out She Was Pregnant