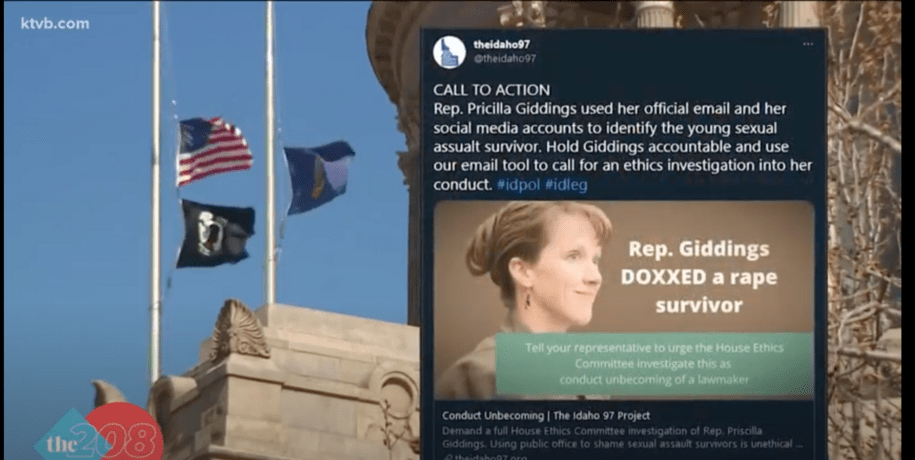 Of course, instead of being regretful for what she did and the danger she put the 19-year-old in, Giddings decided to play the victim card herself. Giddings, a candidate for lieutenant governor, claimed she was the victim—not the teen she outed—during a town hall meeting at the Idaho County Veterans Outreach and Community Center. “I will not be muzzled!” she told audience members at the meeting.

According to Giddings, “she has recently received more than 200 nasty e-mail threats against her and her family, “all for sticking up for my conservative values.'” Apparently, conservative values consist of dragging survivors of rape and identifying them publicly online. But she’s not the only one who believes that: The room, filled with more than 80 people, burst into applause and showed her support.

“And my daughter has even been named in some of those,” she said tearfully, composing herself quickly. “I don’t have a flying career, my husband won’t be hired by some people — but we have to fight back.”

Giddings continued on to speak about the repercussions she is facing for harassing a teen, without acknowledging what the teen must have faced after the lawmaker’s email and social media posts.

The teen Giddings doxxed had accused former Idaho state Rep. Aaron von Ehlinger of rape. As a result of multiple allegations and ongoing investigations, von Ehlinger resigned after board members planned to censor him. He denied all accusations and maintained that the incident was consensual, Daily Kos reported.

Hearing about the accusations, Giddings furthered the teen’s trauma by sharing her information publicly through an article. She claimed that she was supporting a fellow Republican by sharing the news article. Giddings was well aware that multiple investigations were being conducted in light of the teen’s and other women’s accusations against von Ehlinger, but chose to support him anyway. Giddings shared the article link in her official newsletter as well as in a Facebook post. When questioned about her actions, she defended them, noting it was a link to a news article and nothing else.

Her Facebook post also included this caption: “Follow the money! Idaho’s very own Kavanaugh.” Many saw the caption as an attempt to make the rape allegation political, but Giddings denied such claims.

“Everything was in accordance with the House Rule 45 and if Rep. von Ehlinger’s name was going to be made public, I believe that everybody should be innocent until proven guilty and that both sides of the story need to be equally represented,” Giddings said.

But of course, Giddings’ reasoning as to why she doxxed the teen was not bought by all. The Idaho 97 Project and others are working to investigate her conduct and ethics, KTVB reported.

“She shared a redoubt article with both a picture and the name of the survivor in this case,” said Mike Satz, executive director of the Idaho 97 Project. “This is about decent behavior, this is about decency that we should all expect from all of our leaders. That’s all it’s about.”

Others shared similar sentiments, noting that Giddings sharing this information is likely what led to Doe being harassed and chased down after her hearing.

“It is vitally important for leaders to understand that what they say and what they do, it matters,” Satz said. “People pay attention to this. They watch what you do and they listen to what you say.”

“There is clear intent in our mind and in the minds of a lot of people working with this young woman to both intimidate her and to identify her and to basically frighten her,” Satz said. “We don’t have to agree. We can be conservatives, we can be liberal, we can have all these different views. But we have to expect and demand honesty and integrity from the office and if they can’t do that or they won’t do that or they refuse to do that, as is the case it appears with Rep. Giddings, then they should be held accountable for those actions.”

According to the Rape, Abuse & Incest National Network (RAINN), the nation’s largest anti-sexual violence organization, only 230 out of every 1,000 sexual assaults are reported to the police. That means about three out of four assaults go unreported. Two out of three sexual assaults are committed by someone the victim knows. Additionally, 38% of rapists are considered a friend or acquaintance by the victim.

It is difficult enough for survivors to come out and speak about the violence they face. Individuals like Giddings contribute to a toxic culture of victim-blaming that shames survivors into silence.

Martin Scorsese’s Daughter Asked Him to Identify Feminine Products and the...

HIV Stress and Side Effects: What to Know

DWTS’ Gleb Savchenko Becomes a U.S. Citizen and Calls It a...

YouTube is a media juggernaut that could soon equal Netflix in...