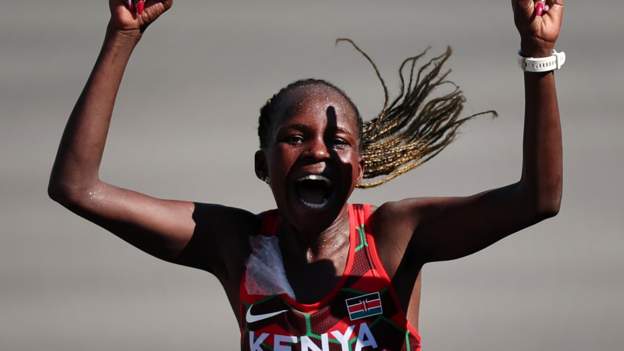 Peres Jepchirchir won the women’s marathon at Tokyo 2020 as Kenya claimed a one-two in sweltering conditions in Japan’s northern city of Sapporo.

The Kenyan team boasted three of the five fastest female marathon runners of all time, however world champion Ruth Chepngetich – who defied the heat and humidity of Doha in 2019 to win gold – pulled up after losing touch with the leaders at 30km.

Jepchirchir and Kosgei were joined by Seidel and Salpeter in the lead group with five kilometres remaining, before the Kenyan pair moved clear and Seidel pushed on following European 10,000m champion Salpeter’s abrupt withdrawal to win bronze in just her third outing over the distance.

Kosgei, a two-time London marathon winner who broke Britain’s Paula Radcliffe’s 16-year-old world record with a time of 2:14:04 at the Chicago Marathon in October 2019, finished 16 seconds behind Jepchirchir and 10 seconds ahead of Seidel.

Both the marathon and race walking events at the Games were moved 500 miles north of Tokyo to Japan’s northern city of Sapporo because of the summer heat in Japan’s capital.

A total of 14 athletes failed to complete the distance in Sapporo, compared to 74 finishers.

France in a fizz over Russia’s champagne label law

See the First Photos and Video of Arie Luyendyk and Lauren...

Jim Cramer picks 10 dividend stocks that could benefit from Biden’s...