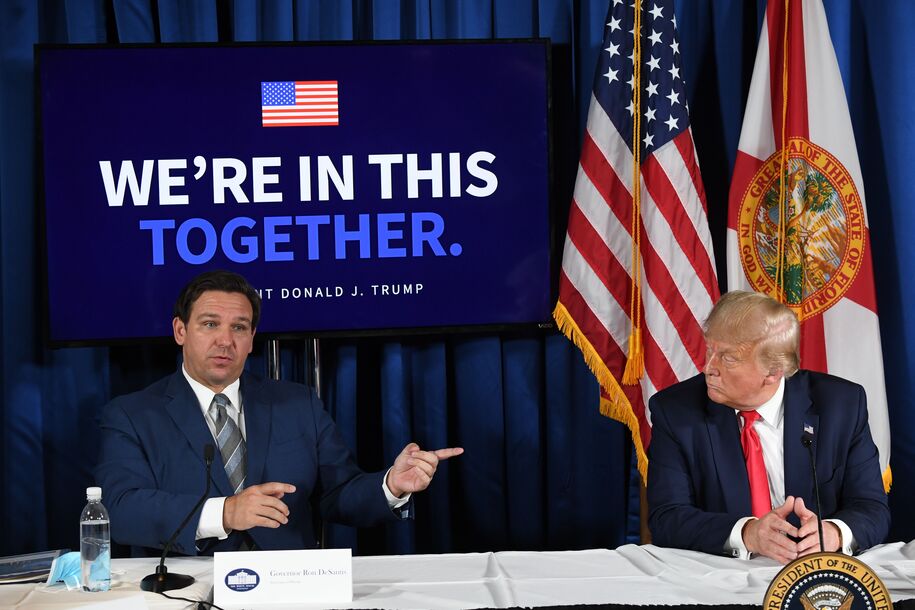 Had DeSantis snubbed Trump by saying he would not attend the rally, or had Trump stiff-armed DeSantis into keeping his distance? That depends on whom you ask. In the world according to Trump, he was the one who told DeSantis not to attend the rally, which was being held some 200 miles away from the site of the Surfside tragedy.

“We mutually agreed. He is working very hard. He is doing a very good job. He should be there,” Trump told Newsmax. “I told him: ‘You should stay there, this is not that important for you.’ He of all people should be there.”

But DeSantis aides told the New York Times it was the Florida governor who made the call. “He spoke with President Trump, who agreed that it was the right decision, because the governor’s duty is to be in Surfside,” said DeSantis press secretary, Christina Pushaw, who also denied any effort by the governor to delay the rally.

Whatever the case, Trump held the rally, DeSantis did not attend, and somehow Trump shockingly forgot to give DeSantis even a single mention in his 90-minute stemwinder—despite thanking other local GOP officials in Florida.

What Trump did manage to work in was a teaser about his own potential 2024 presidential bid. “We are looking at the election, more than looking at it,” Trump said to an eruption of cheers from the crowd.

Some allies of both men have been trying to downplay talk of tensions between the two. But the Times‘ Annie Karni confirms what we all know to be true—Trump’s tragically tiny ego simply cannot tolerate the notion of anyone cutting into his limelight.

People close to Mr. Trump said he had become mildly suspicious of a supposed ally. He has grilled multiple advisers and friends, asking “what’s Ron doing,” after hearing rumors at Mar-a-Lago that Mr. DeSantis had been courting donors for a potential presidential run of his own. He has asked aides their opinion of a Western Conservative Summit presidential straw poll for 2024 Republican presidential candidates, an unscientific online poll that showed Mr. DeSantis beating Mr. Trump.

In case you didn’t get your fill of fireworks over the 4th, don’t fret! There’s sure to be an epic display over the coming months courtesy of the GOP’s elite force of Florida Men.

US v Canada: Who won the vaccine rollout?

Even Trumpers see the ‘Freedom Phone’ is a massive grift

The vaccine mandate is exactly the confrontation that America needs, and...

There’s still no consensus about how the post-pandemic office will actually...