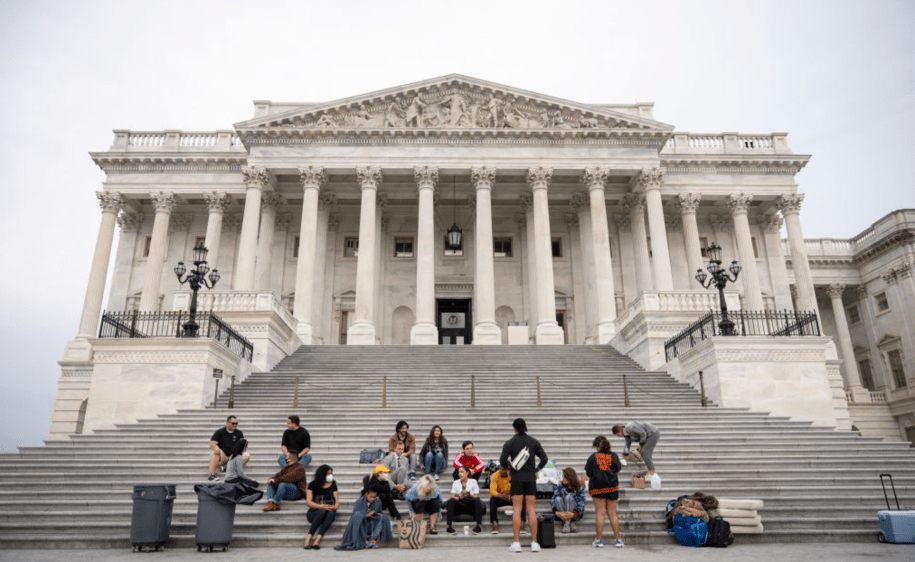 On Tuesday, the tenant delegation—organized by the People’s Action’s Homes Guarantee campaign—held a rally outside Congress as Rep. Cori Bush and Sen. Elizabeth Warren unveiled the Keeping Renters Safe Act, which would reinstate the federal pandemic eviction moratorium and give the Department of Health and Human Services permanent authority to enact eviction bans during public health emergencies. The legislation would also close many of the loopholes in the previous federal eviction moratorium, said Tara Raghuveer, director of the Kansas City-based KC Tenants and the Homes Guarantee campaign, which has also written a National Tenants’ Bill of Rights. Raghuveer was with the tenant delegation in Washington, D.C., this week.

“I will never forget the fear that rushed through my body when I saw the eviction notice posted on my own door. The fear that comes with not knowing how I will be able to keep my children safe, keep a roof over our heads, or keep a job,” said Bush at Tuesday’s eviction bill press conference as the tenant delegation and several of her colleagues stood behind her, including Reps. Ilhan Omar and Alexandria Ocasio-Cortez. “I experienced the violence and trauma all three times that I was evicted.”

In her remarks, Bush condemned August’s Supreme Court ruling that blocked an extension to the federal eviction ban during the pandemic. Just three weeks before the court’s decision, Bush, community organizers, and other progressive members of Congress camped out on the steps of the Capitol for nearly a week, pressuring the Biden administration to issue an extension to the eviction ban.

The stories of other members of the tenant delegation echo a similar sense of fear, sadness, and anger as the uncertainty weighs heavily on their mental and physical health. Vivian Smith, a single mother and a leader with the Miami Workers Center, said at Tuesday’s press conference that she has been “forced to choose between food [and] rent too many times. Many of us had to make the choice or the choices between our health or our homes.”

Corine Ombongo-Golden, a leader with New York’s Northwest Bronx Community Clergy Coalition who is originally from the Congo, has been fighting cancer for the past 18 months. Ombongo-Golden has for years advocated against evictions and for better living conditions for renters in unsafe housing. She was laid off from her teaching job in March 2020, and during the pandemic has had to choose between paying for her medication or rent.

“The fact that we have to still fight for our human rights … in the 21st century is not normal,” she told Prism, adding she’s especially concerned for tenants who don’t speak English and who don’t have the resources to protect themselves against predatory landlords.

For housing justice organizers like Raghuveer, the previous pandemic eviction moratorium enacted by the Centers for Disease Control was the bare minimum compared to what the housing justice movement has been demanding during and long before the pandemic. Even with a moratorium in place, landlords in many parts of the country continued to file eviction orders and found other ways outside this legal process to force people out from their homes. There’s also the question of what people will do as their rent debt skyrockets.

Late last year, Pinzon applied for rental assistance. Five months later, she was told the funds had run out. Housing justice advocates have long criticized what they’ve described as a disastrous and bureaucratic federal rental assistance program. Congress has allocated about $46 billion in rental aid, but last month the Treasury Department said only about $5.1 billion, or 11% of those funds, had actually been dispersed. Altogether, around 11 million households in the U.S. are currently behind on their rent and more than 30 million people are currently at risk of eviction without federal protections. Black, brown, Native, and Latinx families have historically been the hardest hit by eviction crises, an issue only made worse by the pandemic. Meanwhile, last year Politico reported that federal housing aid during the pandemic disproportionately benefited white households.

Mounting rental debt was at the core of a meeting Wednesday between the tenant delegation and Treasury Department officials, who have discretion over the federal rental assistance program—which housing justice advocates like Raghuveer say is largely just a bailout for landlords with little to no safeguards for tenants. Raghuveer said there are some eviction protections written into the rent assistance federal guidance, “but these aren’t enforceable and don’t stop landlords from raising rent or not renewing a lease as a way to evict,” she said.

“I applied for a new program and I don’t know how long I’m gonna have to wait to hear back,” she said. “Now that the [eviction] moratorium is over, I’m going to have to start figuring out how I’m going to stay in this apartment with my children.”

Pinzon’s oldest is 7 years old and her baby is just 3 months old. Although she’s been able to start working again, her number of clients has drastically declined—and so has her income.

“It’s very wearing on your soul when you don’t know what tomorrow brings,” Pinzon said. “It’s just a feeling of dread and you’re trying so hard not to give up, but you’re just tired. It’s not fair that I have to decide whether to feed my children or pay my rent. We need to come up with a system that’s actually going to work.”

María Inés Taracena is a news producer at Democracy Now! in New York City, focusing on Central America and asylum-seekers, among other stories.

Checking in on the Cast of Halloweentown 23 Years Later –...