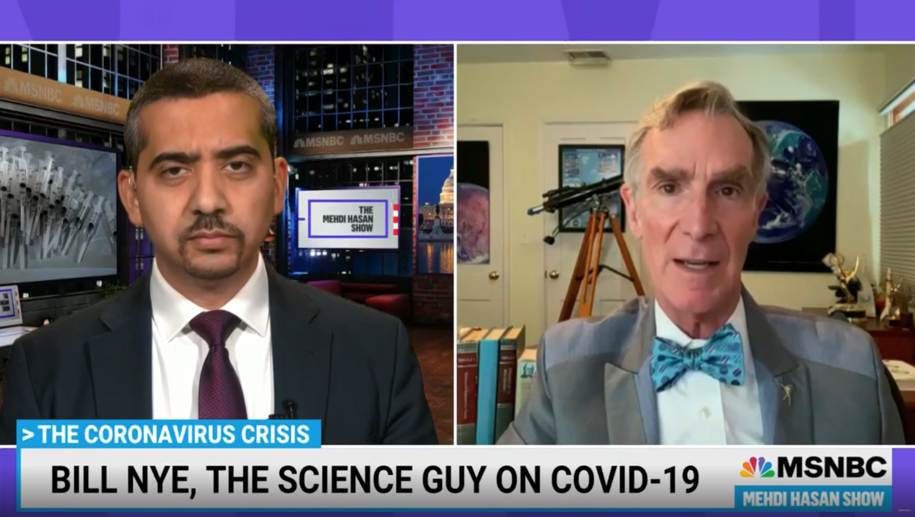 Nye came out hot, first trying to point out the fallibility of anti-vaxxer and Republican Party arguments that vaccines like the ones being rolled out for COVID-19 are an issue of freedom and civil liberties. “This idea that everybody has the freedom to do anything is—we all know that’s not exactly right. You can’t yell ‘fire’ in a crowded theater if there’s no fire and so on. You can’t drive on both sides of the road even though you pay taxes on both sides of the road.”

Nye said he hoped that as more people got the vaccine and began living normal-ish lives again, their more hesitant neighbors would see the benefits of becoming vaccinated themselves. But the issue for full vaccination is that pretending this can’t get worse before it gets better isn’t scientific at all. Sadly, trying to feed science to anti-science-minded Americans has become something of a minefield.

Nye says that it seems that people don’t like hearing or using the term “mutate,” because the connotations remind some anti-science quarters of our society of Darwin’s theories on evolution. In his estimation, the use of “variant” is what scientists might call an olive branch to people who remain skeptical of 150-year-old settled science. “Everybody on the other side, it’s not fair to make me wear a mask. it’s not fair to make me get vaccinated,” he said. “Well, it’s not fair to everybody else if you become an incubator for a variant, doggone it.”

This is how the numbers have played out:

With the COVID-19 virus becoming an endemic public health issue, the anti-vaxx movement is able to fulfill its own circular logic, as the potential calls from public health officials for yearly COVID-19 vaccine shots will continue going forward. This yearly call for a coronavirus shot will further add fuel to the flames of anti-vaxxers who believe this is the money-trail to big pharma that they should be obsessed with. Not the fact that medicines that treat diabetes and the like cost outrageous amounts of money. No, it’s the vaccines.

Unfortunately, it’s the faux conspiracies, muddled below the very obvious ones that we can all see, hear, and or read about, that lower the standards in some states. This degradation of the public discourse means the expectations for leadership is also lower.

Florida’s Covid positivity rate as of today is 9 times higher than California’s. So tell me again which governor should be recalled?!?

In March 2020, when the United States government and its elected officials were at a point where they could have made a serious impact in the unfolding of the past year’s events, the National Observer’s Caroline Orr wrote about the conflict between misinformation and science.

As we all subsequently experienced, the proceeding months included fake therapeutic claims from the twice-impeached former president of the United States, as well as a never-ending stream of bullshit peddled by all of the other scam artists in his orbit. Fighting a global pandemic is hard and the work doesn’t end because vaccines become available. That’s not how any of this works. That’s not how science works, and that is not how scientists and virologists have said it works. Ever.

The Republican Party’s policy-free corruption has found the perfect mark for its brand of scammery in the anti-vaxxer movement. Conspiracy theorists believe that their broad, dot-connected, fact-eliding rationalizations prove their intelligence, when all they do is protect fragile egos afraid to admit when they are wrong. Any conversation with a conspiracy theorist ends with them moving the goal posts after every question of their is answered. You can tell them why this one assertion they are making makes no sense, you can explain to them how this one fact they heard isn’t real or true, you can point to all of the data and they will just ask another ‘why’ question. The problem in the end is that they aren’t interested in knowing ‘why’ anything. Ask a conspiracy theorist why and they already kinda know why. The answer is “them.” Who is “they”? “They” is “them,” don’t you know?

It’s this form of narcissism that allows conservative officials who have failed the public at every conceivable moment to rewrite history and try to pretend that they are now the party of logic and science.

Inflation is the big challenge for markets and the Fed in...

US general reflects on Afghanistan departure

Joint Chiefs of Staff made plans to resign rather than obey...