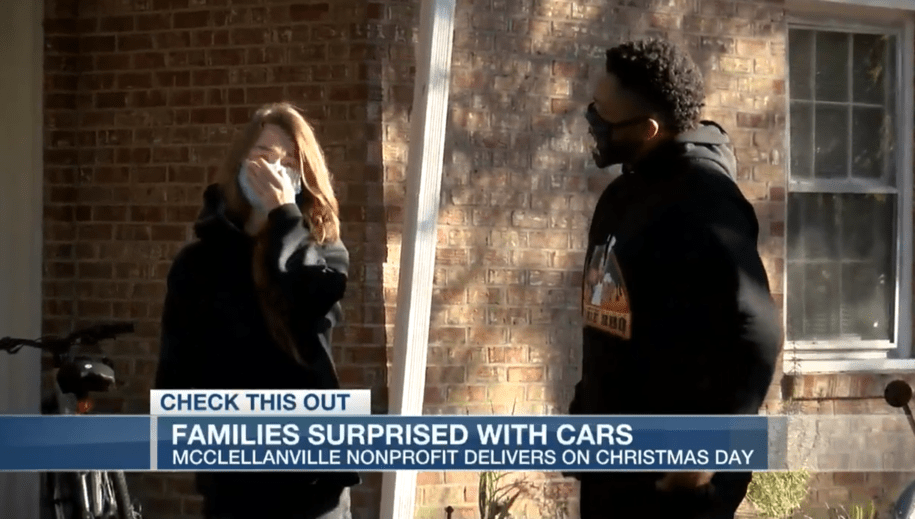 Eliot’s father, Kevin Wayne Middleton Sr., had owned a car repair shop when Eliot was growing up, and the two men opened their own shop in 2004. The shop closed in 2014 due to Kevin’s failing health, but the two men spoke about what they might do to help out the community they lived in from time to time. The seeds of transportation inequalities was sown in Middleton during that time. “We had a lot of single moms as customers, and we always ran into problems with them not having enough funds. We spoke about trying to find a way to help them, but we never had the chance to sit down and figure something out.”

In March, Eliot’s father passed away and the pandemic began, and he put off the idea of fixing the clunkers for a few months before starting on the project. But since then, Middleton’s been working and helping out where elected officials have failed. Middleton has started the nonprofit Middleton’s Village to Village Foundation, where he posts pictures and videos of the community members he’s helped.

After putting out a call for cars that people were ready to send to the junkyard, Middleton has been able to gets dozens and dozens of cars into his backyard to work on. For Christmas, Middleton was able to bring Jessica Litchfield a surprise. “I was thinking Santa was coming to the house or something,” Litchfield told Live 5 News back in December. “We had no idea. This was a complete shock. This is so awesome.” Lichfield has two children who attend a charter school that offers no transportation, and trying to hold down a job at the same time has been difficult. Her voice trembling, Lichfield explained: “This has been a wonderful Christmas. I could have never even dreamed of such a thing. It’s such a relief to my life. This makes a difference for our life.”

Middleton has worked with fellow mechanic Matthew Poston on upward of 90 cars he has parked out by his home for most of the pandemic, while also keeping his business afloat with delivery and takeout orders, and an outdoor pavilion for dining. The first car he repaired was finished in September 2020. According to the Post, Middleton gave the car to an unemployed single mother of two children; One of the children has a disability and requires consistent medical appointments.

“She was astonished about the car being hers and she was crying,” said Middleton, adding he heard about the woman’s financial challenges through a mutual friend on Facebook and offered to surprise her with the car. “That felt great. I could feel my dad’s presence around me, and I could hear him saying ‘this is exactly what we always wanted to do.’”

Being considered a local hero is nothing new to Middleton, as he’s been lauded as one for years before coming up with this transportation idea. Back in 2019, Middleton was recognized for his work in providing food assistance to families, teachers, and students, and organizing food drives. And even then, Middleton made it clear he was working in rural areas that are frequently forgotten in the implementation of infrastructure spending.

Middleton told WCBD News 2 back in 2019 that he does all of this not only because of the great feelings it brings him to give back, but because it’s important for him to model for his children. He brings his daughter with him when he’s giving back to the community. “For my kids to see exactly what I’m doing as far as interacting with different communities, different people, when they grow up, they can have this same feeling to want to give back and help out. It’s not about the amount you have. If you have a hundred bucks you can give back and share it with somebody.”

Here’s Middleton covered in a short piece on CBS News. I think I have summer allergies.

Morgan Stanley: These 11 global stocks will benefit as inflation stays ‘higher for longer’

Why This Athlete’s Career May Come to a Screeching Halt

We Ranked Gossip Girl’s Couples, Prepare to Have Thoughts and Feelings...

People evicted during the pandemic travel to Washington, D.C., to confront...

For Surprise Medical Bills, It’s the Beginning of the End

Rutgers, Duke and Vanderbilt all have ties to the $100 million...