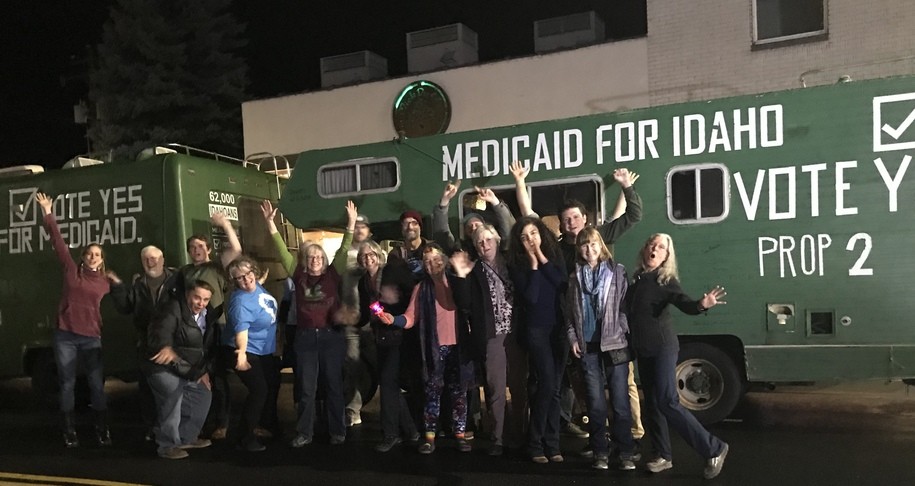 Back in 2018, a group of determined Idahoans hit the road in a couple of old RVs they painted green, taking on the herculean task of getting a ballot initiative to expand Medicaid in the state. After losing a bad set of laws privatizing education to a voters’ initiative in 2012, the Republican legislature here created what they thought would be an insurmountable barrier to getting an initiative onto the ballot. They didn’t expect Reclaim Idaho, who figured out all of those hurdles and organized their way around them.

Medicaid expansion did get on the 2018 ballot, and it absolutely crushed with 61% of the vote. The legislature, of course, came back the next year with two more attempts to kill the initiative process in the state, both surprisingly vetoed by Republican Gov. Brad Little. When they came back in 2020 with yet another effort, Little signed this one, fruitlessly hoping to stave off a primary challenge from his right. Reclaim Idaho, working on a new initiative to fund education through tax increases on the wealthiest residents, sued the state and won.

Now their volunteers are out in Idaho neighborhoods collecting signatures for that effort. And here’s where we get to the really great stuff.

“I don’t even know his name, but I’m alive because of him and his friends,” a Boise resident posted on Nextdoor. ”I was working in my yard a couple weeks ago when a man approached with a clipboard asking for signatures for Idaho education funding. He asked did I know about Medicaid expansion and what ‘they’ had done to get Idahoans covered in 2018. I looked him in the eye and said, ‘Yes. I am alive today because of it.’”

She goes on to tell her harrowing story: “I have a rare condition known as Idiopathic Subglottic Stenosis. The cause is unknown, and there is no cure. It is terminal: without frequent ongoing surgeries scar tissue cuts off my airway and I suffocate to death slowly.” It very nearly did kill the single mom of four, uninsured after leaving an abusive partner, and put her deeply in debt. “And then … Idaho passed Medicaid Expansion. The day my best friend told me I called. Surely, it was too good to be true. The woman on the other end joyfully informed me 5 mins into the call that yes I was now enrolled and had free health care. Free. Health care.” In her words:

I explained this story briefly to this man with his clipboard. He told me he and his friend, Luke, were the ones who fought for it. I stood there dumbfounded. What is the protocol for suddenly finding that the human in front of you, a stranger, saved your life? I stammered thanks, I told him I wouldn’t be alive without them… and he said he would tell Luke, and I signed his petition for Idaho education, and… he walked away. And I just stood there, in my flowerbed, in awe.

She continued, “I really love being alive. And I am incredibly thankful that some privileged white men used their voice when I didn’t have one, to keep me alive.”

That’s why we do this.

GM advising some Bolt EV owners to park 50 feet away...

Johnny Weir Responds to Criticism of His Look at the Tokyo...

U.S. and Russia Agree to Talks Amid Growing Tensions Over Ukraine

46 Ways to Give Experiences Instead of Stuff This Year (Even...