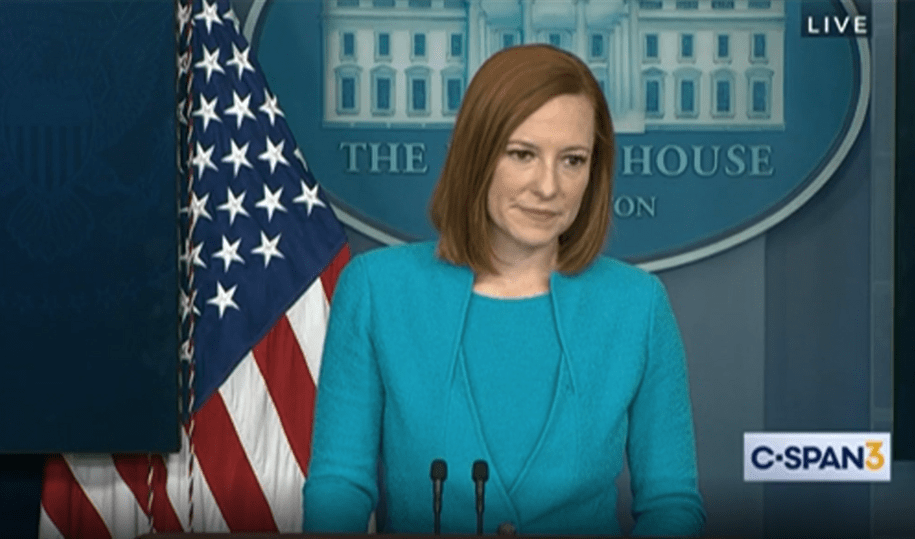 After passing on the Tom Cotton quote about indoctrination into “un-American ideas,” Psaki smiled and poked back. “Now you’ve intrigued me. What are the un-American ideas that are indoctrinating our youth?” The reporter responded, “The legislation doesn’t lay out the precise—,“ at which point, Psaki made sure this important detail wasn’t left off mic, asking “Oh, he’s not specific about the indoctrination by leaders from universities?”

The reporter gives what he suspects are examples of what Cotton is likely talking about, including the Arkansas senator’s anger at historical analysis like the 1619 Project and critical race theory. The reporter reminds Psaki that Sen. Cotton is one of a slew of conservative and libertarian types who claim “there’s a liberal bias on campus that targets conservatives.” There isn’t much to say about the conservative movement’s issues with reality. Educational institutions are supposed to have a mandate to present their students with the realities of the world and history for discussion—something that flies in the face of the fairytale lies conservatives tell themselves. So Psaki asks the reporter if he knows what Cotton says he’s going to do with the tax money he plans on generating. The reporter, like the rest of us, only has the vaguest of ideas what Cotton’s plan is, except that it is connected to some promise of “job training” programs.

SEC. JEN PSAKI: Well, without much detail of where he thinks our youth are being indoctrinated, it sounds very mysterious and dangerous, but — although I don’t think that […] we believe that educating the youth and the future leaders of the country on systemic racism is indoctrination. That’s actually responsible.

But I would say, if he’s trying to raise money for something, then our view is there’s lots of ways to do that. We know that a number of corporations hugely benefited financially during the pandemic. They could pay more taxes. We think the highest 1 percent of Americans can pay more taxes. And if he wants to have a conversation about worker training, we’d love to have him over and have that conversation.

Tom Cotton isn’t serious about helping anyone not named Tom Cotton so sadly, I doubt he will except that invitation.

Ordinary Joe Stars Reveal What It’s Like Acting in 3 Parallel...

Britney Spears Reflects on Being a Young Mother as She Shares...