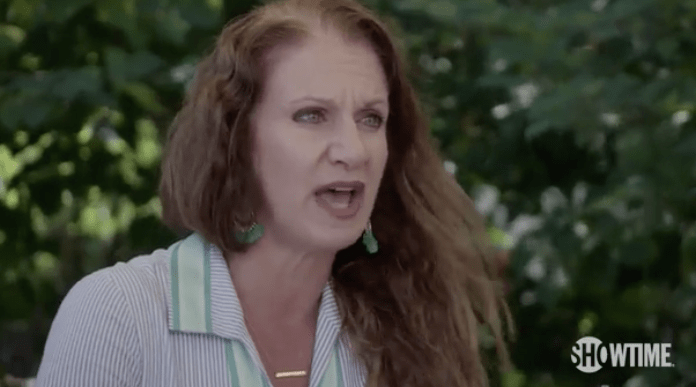 Then she has the caucasity to say that Black men in America aren’t judged by the color of their skin, but by “how they’re dressed,” “their actions,” and “how they respect others.” Adding that if a “kid is pulled over by a cop, does it matter what color they are? Or is it the respect they give to that police officer?” So, police brutality against Black and brown citizens is about respect and not racism. Glad we cleared that up.

By the way, Menders is not just another suburban mother of six, fighting against Virginia’s equity and inclusion curriculum in schools, she’s also a GOP strategist. She may attempt to pass herself off as one of “Virginia’s leading activists,” but in reality, she’s working to help get Republican gubernatorial candidate Glenn Youngkin elected.

Menders says she thinks parents should decide whether or not kids are taught about racism rather than their teachers making the decision.

Menders told Circus’ Alex Wasner that she supports Youngkin because he’s not pushing the “racism narrative.” But here’s the thing: Menders is the one pushing the racism narrative by denying the actual historical fact that racism exists in this country and around the globe. And no matter how hard she wants to pretend it doesn’t, by twisting the arms of Loudouners to sign school board recall petitions for officials who support teaching real live history, actual facts will remain.

Menders and other parents across the nation have made diversity and inclusion curriculums and critical race theory the devils white people don’t want to face. It makes them feel guilty, they say, or it’s divisive.

According to the Brookings Institute: “CRT does not attribute racism to white people as individuals or even to entire groups of people. Simply put, critical race theory states that U.S. social institutions (e.g., the criminal justice system, education system, labor market, housing market, and healthcare system) are laced with racism embedded in laws, regulations, rules, and procedures that lead to differential outcomes by race.”

Teaching students about structural racism has become a political flashpoint across the country. Here’s my interview with one of Virginia’s leading activists, Patti Hidalgo Menders — a mother of six who’s fighting the state’s equity and inclusion curriculum. Via @Sho_theCircus: pic.twitter.com/qQlopoYd3j

Morgan Stanley: These 11 global stocks will benefit as inflation stays ‘higher for longer’

The Big Lie of election fraud is a full-bore GOP scam,...

‘Meet the Press,’ like the other Sunday shows, is a relic...