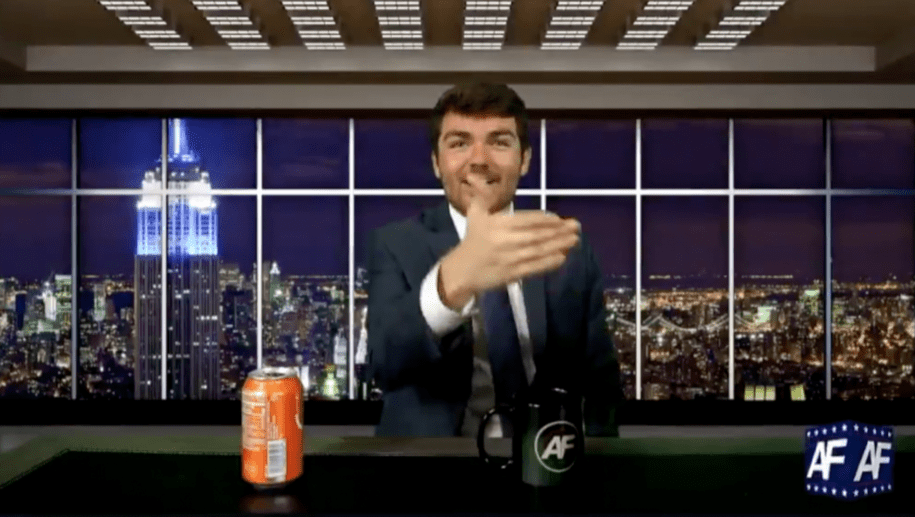 The problem: It’s not clear at all that Fuentes, general of the so-called “Groyper Army,” is even on a federal no-fly list. It’s far more likely that he has been banned by certain airlines from flying with them for his bad behavior onboard—he was removed from a Southwest Airlines flight for refusing to put his mask over his nose and then telling the attendant, “Fuck you”—or for his widely broadcast rants “joking” about mass murdering people at a flight attendant school as well as waiting for them and killing them in the airport parking lot.

Either one, of course, could well qualify him for being placed on a TSA no-fly list without any free-speech issues, since threatening speech is not protected by the First Amendment. But Fuentes is claiming the ban is because of his far-right views—and for his presence at the Jan. 6 Capitol insurrection, where many of his followers entered the building and vandalized offices (including one who is believed to have stolen House Speaker Nancy Pelosi’s laptop), though Fuentes remained outside. He has hired an attorney.

His claim to government persecution is based on a video he posted on Twitter of being refused a seat on Southwest Airline by a ticket agent. In it, Fuentes asks a woman working the ticket counter: “Who did you say to talk to down there?” She answers: “You can try talking to … we’re not saying that they’re going to have an answer … I’m not sure they’ll have an answer for you.”

“Okay,” Fuentes replies. “And there’s no way I can get on this plane?”

“No,” she says. “They’re not letting you fly with Southwest.”

He asks if he can book a flight on another airline. “I’m not sure,” she says. “I know that was a TSA number, I’m not sure if you’re blocked from just a no flight list.”

“Did they give you a reason?”

“I’m not sure. They just told me that you’re not allowed to fly. That’s all they told me,” she answers.

Fuentes’ tweet claimed it was “video proof I am on a no-fly list.” Except that it’s not—particularly not when the airline in question is Southwest.

It was a Southwest flight, in fact, from which Fuentes was ejected for breaking masking rules in early December, and live-tweeted it. “I’m about to get kicked off my flight to PA because my mask isn’t covering my nose,” he posted. Then: “Yup. Just got kicked off.”

Afterwards, Fuentes unleashed threatening rants against flight attendants on his podcast show, ending them claiming he was “kidding.” First he talked about waiting in a parking lot for an attendant and violently confronting him:

Invariably all flight attendants are women and homosexuals. I’ve never seen anything else.

“Excuse me, could you put your mask on?” “Uh, yeah, and let me tell ya, I’m gonna land, and then I’m gonna get in the airport parking lot, and I’m gonna wait for you. And then I’m gonna put a mask over your face, your mouth and nose. You still need to be wearing the mask even if you can’t breathe. Nah, I’m kidding!

Then he talked about going to a flight attendant training center and committing mass murder with a gun:

It’s still possible that Fuentes has been placed on the TSA no-fly list, but it’s abundantly clear that an airline on which he has been disruptive is well within its rights to ban him. Moreover, Fuentes’ heavy involvement in the “Stop the Steal” protests prior to the insurrection, as well as his proximity to the insurrection itself (not to mention his avid advocacy for it) and his multiple close associations with a number of the people who have been indicted for invading the Capitol may well have placed him on such a list—not for his views, but for his behavior and associations with domestic terrorists.

Gosar—who, as Nick Martin notes, has never previously expressed any concerns about the civil liberties problems associated with no-fly lists—is only one of many people who have to come to Fuentes’ defense since he made these claims, ranging from the usual far-right suspects such as “Groyper Mom” Michelle Malkin—who filed an FOIA request in Fuentes’ case—and Tucker Carlson, as well as faux progressive Glenn Greenwald, who defended Fuentes on Twitter by claiming that “DHS is explicitly ramping up its domestic War on Terror and this weapon will be part of it.”

There’s a reason that Arizona Congressman Paul Gosar has become white nationalists’ favorite Republican: Besides promoting their conspiracy theories and speaking at their conferences, when they start throwing fits based on their paranoid fantasies, he’s quick to jump into action at their behest.

Afghanistan: In pictures: Kabul – a day after Taliban takeover